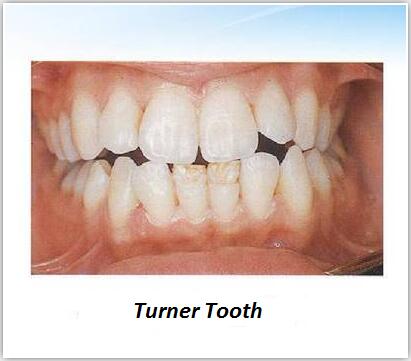 Turner tooth is one kind of enamel hypoplasia involving a solitary permanent tooth. It related to infection in the primary tooth that preceded it or to trauma during odontogenesis. It was named after Turner who first discovered it. Typically, Turner tooth occurs during the transition from the baby teeth to permanent teeth. Moreover, it is manifested as a portion of missing or diminished enamel on permanent teeth.

Hutchinson's teeth(also known as Hutchinson's incisor, Hutchinson's sign or Hutchinson-Boeck teeth) are a sign of congenital syphilis. Babies with this have teeth that are smaller and more widely spaced than normal and which have notches on their biting surfaces. It is manifested as half moon incisor. It is named after Sir Jonathan Hutchinson, an English surgeon and pathologist, who first described them.‍

The Differences of Turner Tooth and Hutchinson’s Teeth

Ⅲ. Different Teeth changes: Turner tooth tends to have obvious color changes and possible teeth defect; However, Hutchinson’s teeth are mostly manifested as half moon external shape changes though the teeth may also lack of gloss.

Nevertheless, there are still something in common of Turner tooth and Hutchinson’ teeth. They all belong to deformity teeth and will do harm to both external beauty and dental health. It's easy to breed bacteria, produce the teeth diseases such as caries and periodontitis, etc. It’s also easy to accumulate dental calculus, not conducive to maintain oral hygiene. Both Turner tooth and Hutchinson’s teeth can adopt resin cover and porcelain teeth to make dental restoration and the dental restoration effect is very ideal.

TAG:
PREV: How is Gingival Atrophy Treated?
NEXT: What are the Symptoms of Gingivitis?

Please describe the situation in your mouth as possible as you can.